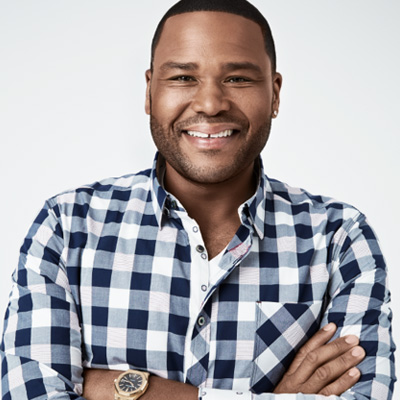 Anthony Anderson is star and executive producer of ABC’s sitcom “Black-ish,” which will premiere its second season this Fall. He won an NAACP Image Award and earned an Emmy nomination for his role as Dre, a family man that struggles to gain a sense of cultural identity while raising his kids in a predominantly white, upper-middle-class neighborhood. He stars opposite Tracee Ellis Ross and Laurence Fishburne.

Anderson has appeared in over 20 films, and his performance on “Law & Order” earned him his fourth consecutive NAACP Image Award nomination for Outstanding Actor in a Drama Series for the 2010 season. Before joining Law & Order, Anderson starred in the New Orleans-based drama “K-Ville.” Over the years, he has displayed his bountiful talent in the DreamWorks’ blockbuster “Transformers,” directed by Michael Bay as well as in Martin Scorsese’s Oscar winning feature, “The Departed,” alongside a stellar cast including Leonardo DiCaprio, Matt Damon and Jack Nicholson.

Most recently, he has been seen in the Sundance film “Goats” and 20th Century Fox’s “The Big Year” starring Jack Black, Owen Wilson and Steve Martin, directed by David Frankel.

He first gained attention as one of Jim Carrey’s sons in “Me, Myself, and Irene,” and has subsequently appeared in such films as “Scary Movie 3,” “Barbershop,” “Kangaroo Jack,” “Exit Wounds,” “Cradle 2 the Grave,” “Two Can Play That Game,” and “Malibu’s Most Wanted.” He also starred opposite Eddie Griffin and Michael Imperioli in “My Baby’s Daddy,” opposite Frankie Muniz in “Agent Cody Banks 2” and had a cameo in “Harold and Kumar Go to White Castle.” Anderson brought his talent and humor to the small screen in his own WB sitcom “All About the Andersons” which was loosely based on his life. Anderson appeared in the police-drama television series, “The Shield,” opposite Michael Chiklis and Glenn Close, and in NBC’s “Guys with Kids.” He can next be seen in Barbershop 3.

Anderson grew up in Los Angeles. While pursuing his acting career, he continued his education by attending the High School for the Performing Arts, where he earned first place in the NAACP’s ACTSO Awards with his performance of the classic monologue from “The Great White Hope.” That performance, along with his dedication to his craft, earned him an arts scholarship to Howard University.